June 07, 2021, 09:25:14 PM
A little while into the making of my map, I noticed that the upper bodies of units can't be hit. Anything you shoot will just go straight through them, only their legs can be hit.
Anyone know what may be going on here?
#2

SWBF2 Modding / How do I add the Kashyyyk gate?

May 26, 2021, 09:35:01 AM
As the title says, I would like to add the Kashyyyk gate that can open and close by destroying or repairing the gate winch. How do I do this? If I just insert the object from ODF and such, it doesn't work, I also tried adding some stuff from the Kashyyyk conquest script, but it still didn't work.
#3

May 21, 2021, 10:30:51 PM
I've recently began working on some custom maps for this game, and in the one I'm currently working on, I've decided to have six instead of the default four.
So, I modified the relevant LUA file, added the objects from ODF, added the regions and spawn points (forgot the proper name for those), and linked them together and all that. Everything looks the same between the default and extra two command posts, adjusted for the number of course.
So, capturing the command posts works, humans spawning at them works and the AI seem to have the incentive to capture it, but they never spawn at them
Does anyone have any idea what I might be doing wrong?
#4

General / Re: Memories on the Battlefront

May 31, 2020, 07:06:44 PM
This isn't a specific memory, but I remember finding and playing around with glitches in SWBFII PS2 with my brother, like the "stalking" animation (not sure what other people call it), the glitch that causes only the basic soldiers to spawn (or Han Solo & Boba Fett in Hero Assault), visual glitches like Count Dooku's slam attack and his weird cape, getting under the floor on Polis Massa, using the LQ models cheat code just because it's funny, and more that I've forgotten.

And of course, all of the classic voice lines, especially when they play right after another, as if they're speaking to each other.

You may also want to get the official 1.1 patch and the unofficial 1.2 (or 1.3?) patch after that. All of this is available on ModDB.

General / Re: I've been playing Battlefront 2 for 13 years

It was just another SW game to me at the time (among those like LEGO SW and Rouge Squadron), but it has grown on me ever since. It's such a cool setup, especially with fan mods and rezzed maps/units.
#8

Console Gaming for SWBF and SWBF2 (PS2/XBOX/others) / Re: I got splitscreen to work online for BF2

I'm no admin, but it might be easier and less sketchy to provide an SHA1/MD5 for the needed base ISO and an xdelta patch.
#10

General / Re: What is the point of swbfspy lol

Requests / Re: Desann as an Special Imperial Unit.

January 14, 2020, 07:37:09 PM
I'm rather new to this community, but, I looked too, all I could find was an old post on Gametoast, the replies say that it's not a great model. However, there's a newer model in the Saga Edition mod, which is on ModDB, but I couldn't find the source. Maybe you could contact its developer. 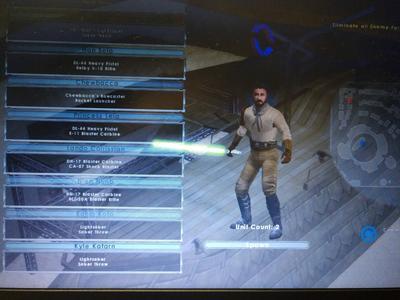 January 11, 2020, 06:37:06 PM
I read here http://www.swbfgamers.com/index.php?topic=11307.0 that you can make the AI land in capital ships in space battles, and my gripe with space battles is the lack of such. However, I've yet to come across any maps that make use of this, as far as I know. Whether it's a custom map or mod of an existing one, either works, I don't really care.

If you know of one, please let me know.

I'd say Kamino, because, to me, just about every class works well.
#14

Welcome Center / Re: Banjo2, on the job

We host PS2 servers as well as PC servers.  Feel free to ask questions if you need any help
.