December 31, 2020, 04:15:06 PM
Happy New Year! I thought I'd start this thread so you could all mention your new years resolutions or anything that was good about last year!

October 03, 2020, 03:46:44 PM
So, today is the day when I finished playing Squadrons Campaign, and I have to say that I genuinely had fun with the story and the combat (With a controller) is very much entertaining. I have yet to try out any Multiplayer, but I'm going to explain some points I liked about the campaign.

[spoiler]1). Return of the Starhawk in a game, I like that they've shown the Starhawk again. It's a very cool looking ship, honestly its design almost reminds me of the Gravestone from SWTOR: KoTFE. And especially seeing its powerful tractor beam in action was just another favourite.

2). The Imperial Pilot character you play remains loyal to the Empire. Now this has always been a bit of an annoyance that I had with the Battlefront 2 2017 campaign where Iden switched sides so easily, I'm just glad that the pilot didn't switch side.

3) I know it ain't major, but Thrawn got a name drop in this campaign. I'm hoping the more he gets mentioned in games and TV that we'll eventually get a game with him in properly. There's even a hologram that you can get in MP that is legit his Stardestroyer's hologram!

4) As you make your way through both Imperial and New Repuiblic stories, they get you to pilot different ships as you go through. I'm glad to see the return of the Tie Reaper for the Imperials, the cockpit is something that I don't think has ever actually been seen before properly, so I'm glad to see how they've designed that![/spoiler]

I do have some more points, but I can't think of many more right now. At the end of the day, if you're interested in trying the game out, I recommend that you use a controller. The mouse and keyboard controls aren't that great, and I found it very hard to control with mouse and keyboard.

Another thing I like about the game is the amount of customization you get with the pilots and the ships themselves, you can pretty much change the weapons, engines, hull, shields. Giving you a whole bunch of different buffs and debuffs along with them!

May 03, 2020, 06:04:57 PM
I shall refrain from posting any screenshots, but all I'll say is: The Episode has ended off TCW in a way I could've never imagined. I loved Season 7 and especially the final episode!

It's included such a large amount of great scenes, and I just love how well done it is and how it ties in with RoTS! Ahsoka has always been my favourite female star wars character, and now seeing her back in TCW and knowing that she survives (Due to her appearance in Rebels.) Kind of kept my mind at ease, but I was at the edge of my seat during the entire episode!
Spoilers below:

[spoiler]I can believe Vader actually had a shot in the episode, even though he was at the very end, I still like how they pictured him in the scene. Even with him holding Ahsoka's lightsaber, which makes me think that he still has some semblance of Anakin inside of him.[/spoiler]

[spoiler]Another scene that I found sad was the one with all the clones graves, and It kind of makes me happy that they buried them as well. Still, it's sad that Jesse died and charged Rex with treason.[/spoiler]
#4

The Republic Commandos are here, there are also mods that add Omega Squad! 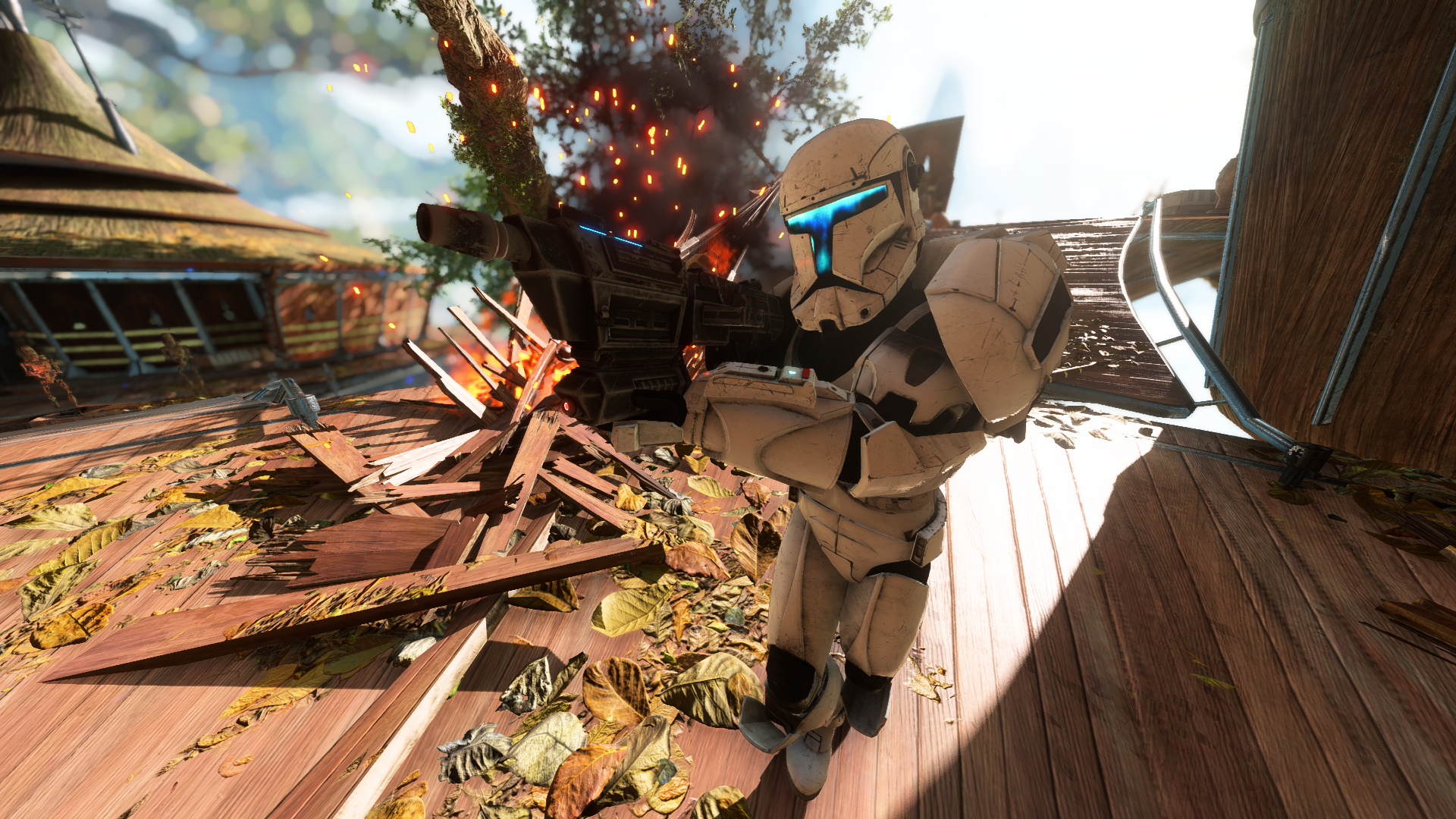 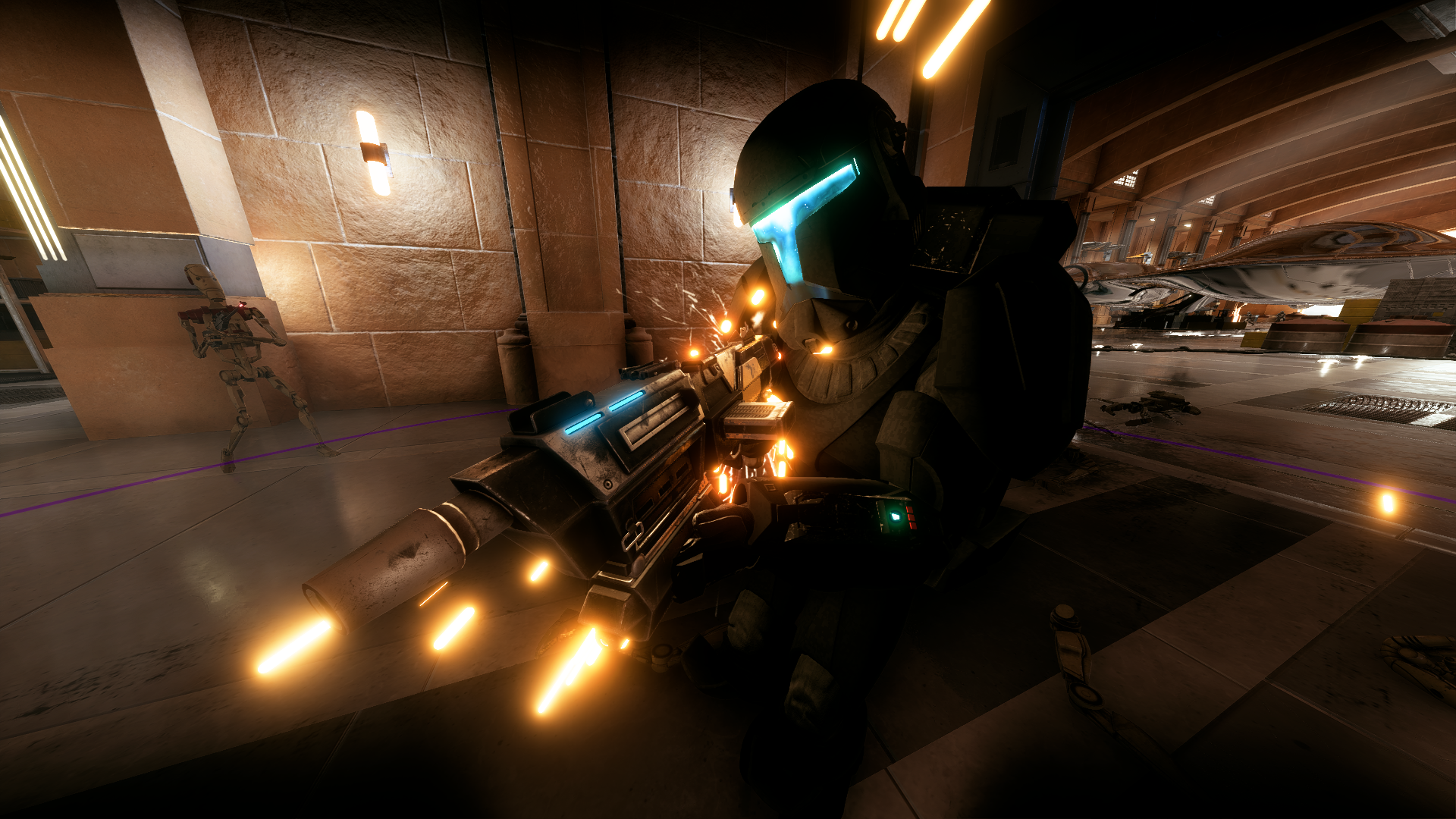 Some of you might not remember me, I've not been here in a while.
#5

Star Wars Battlefront: EA Reboots 1 and 2 / General Grievous Has Just Been Released in SWBF 2 EA and He Doesn't Feel Right! 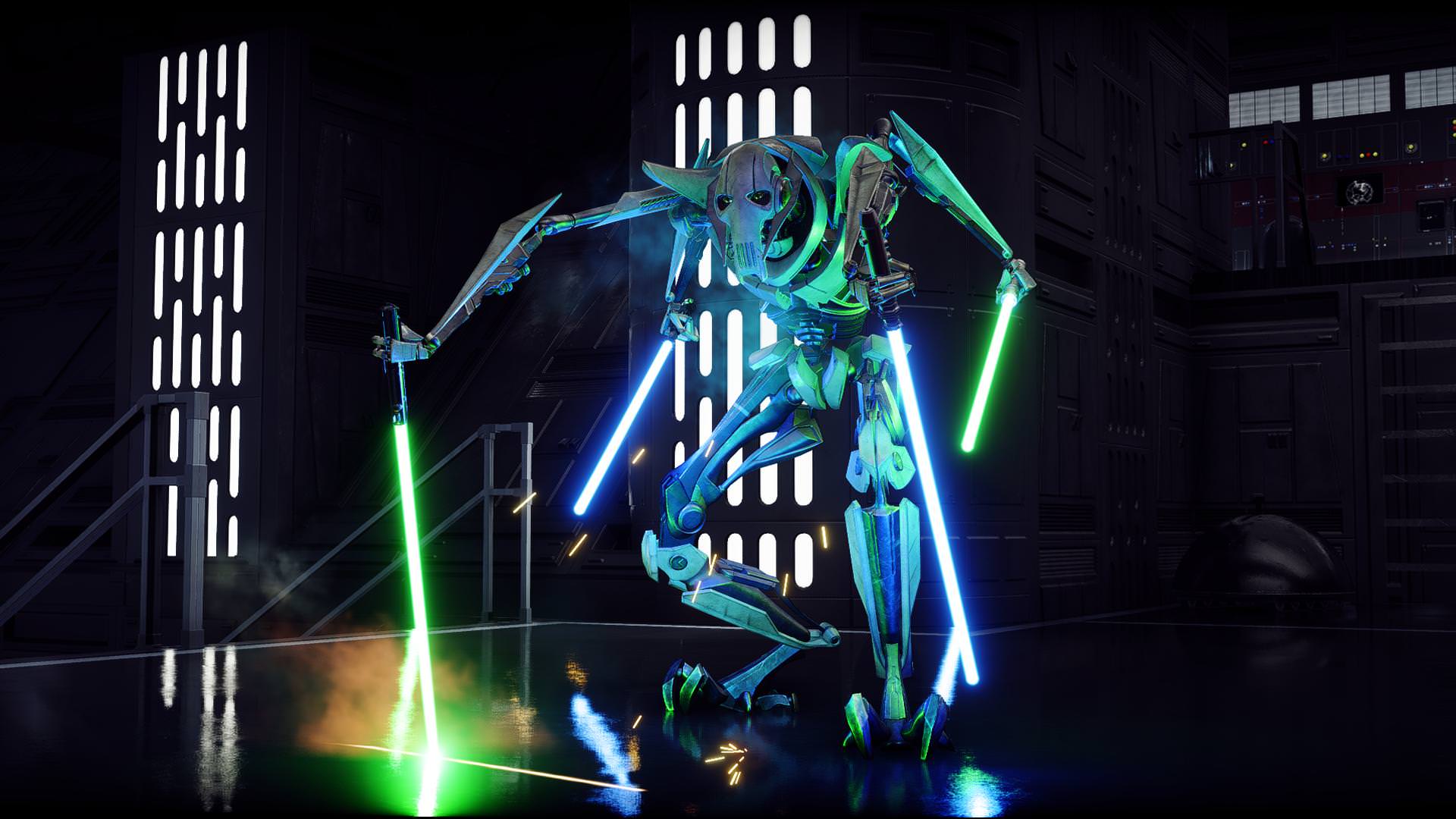 He hasn't been out for long and I've had the chance to play him a few times. His default attack doesn't include his 4 arms like it does in OG BF 2, but instead his 4 arms are included in a lunge ability.

And he comes with 2 skins, his basic skin which is just what he looks like normally and then we have his battle damaged skin: 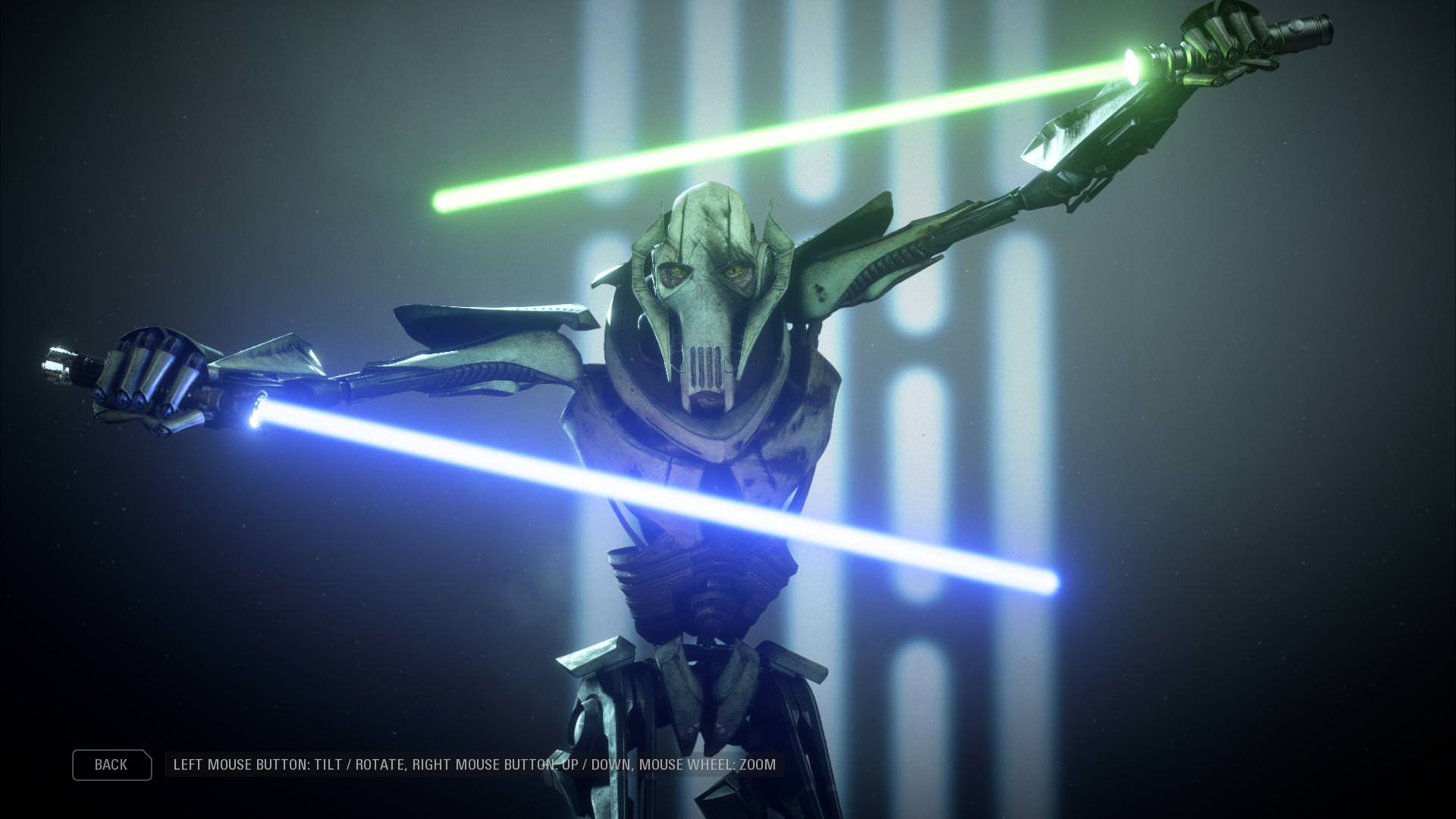 This skin isn't that great as it only includes a few edits to the base design. And these are his abilities: 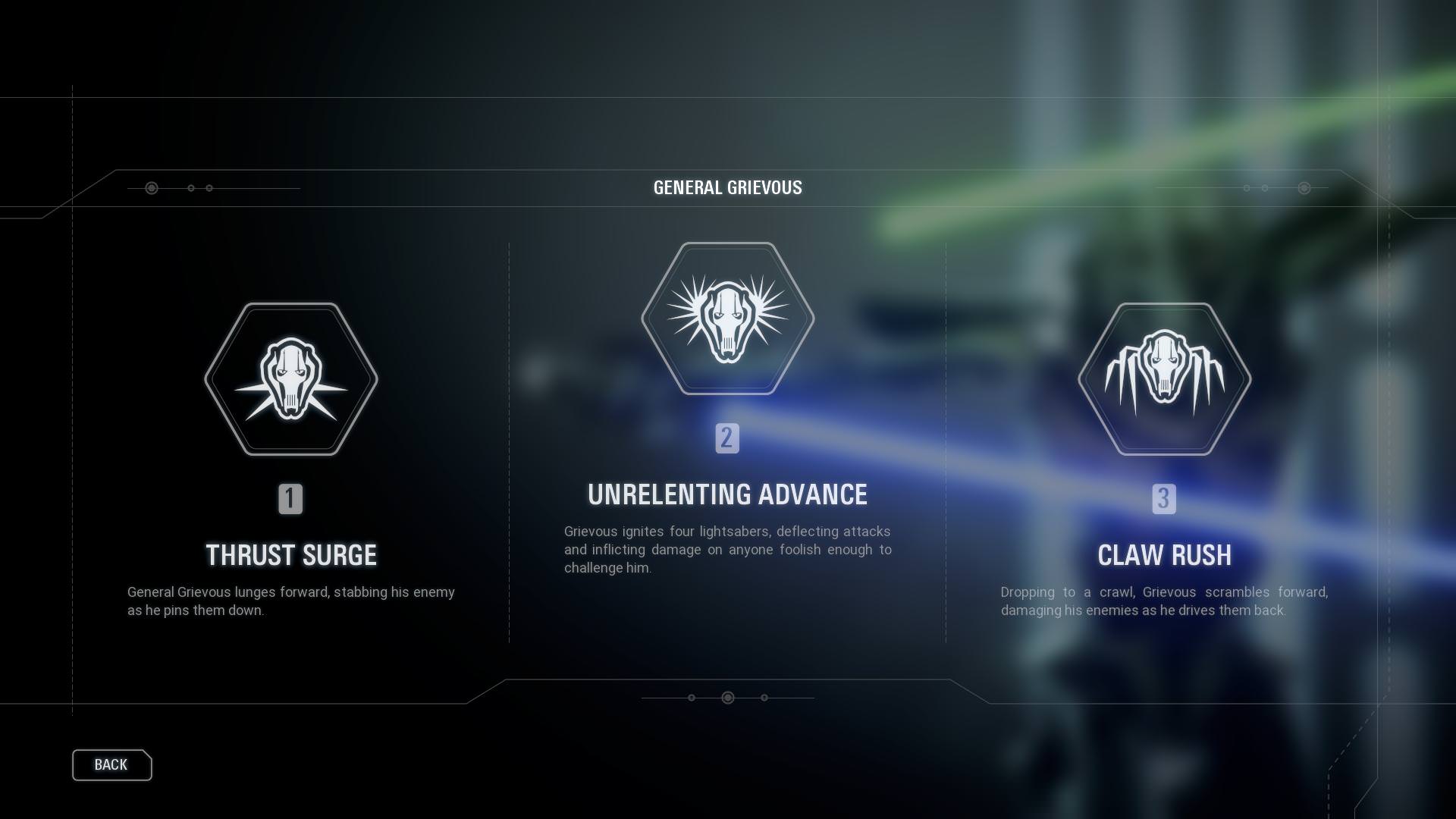 They're fun to play with but the thrust surge ability is one that doesn't always kill the enemy, you have to actually line yourself up to make it work. Which in my mind is bad design.

Overall, I prefer the OG BF2 Grievous. Yes, this Grievous was long awaited but he feels way too clunky to have been in the works for a year...

- If season 3 is announced and there is no Obi-Wan, Grievous or Geonosis then this game is officially dead.
#7

General / I have returned... I think

(I started modding Battlefront 2 EA not long ago!)
#9

SWBF2 Modding / How do I start modding?

Star Wars Battlefront: EA Reboots 1 and 2 / My thoughts on SWBF2EA

So far; I've played a lot of the game recently and I've finished the campaign under 5 hours, and played tons of multiplayer matches!

[spoiler]The Single Player Campaign is very short and resides around Iden Versio finding out what Operation: Cinder is actually about. And that is the incineration of planets that the Emperor had pre-selected before his death. Planets include: Vardos and Naboo (Probably more but the New Republic destroys all the satellites and prevents them from using them again.) And, some of the chapters don't even have you playing as Iden. You either play as, Luke, Han, or Leia. And in the last chapter, you play as Kylo... This whole campaign is just... bland. I was easily able to find out what was going to happen at the end; Which was the Battle of Jakku where the Empire fell and then Iden and Agent Del actually had a daughter (Who I think could be Rey, but who knows?) And then, the first order rises.. [/spoiler]

My review of the campaign and rating? 5/10. If it was longer than 5 hours, then I'd give it a higher rating.

And now, multiplayer. Multiplayer is very fun and mostly balanced. You get tons of maps and different situations of the maps, currently on Deluxe Edition people can access the game which is why HvsV is so empty and dead... Because not a lot of people play it. The heroes are very well balanced, I managed to get enough credits in a day to get Vader! Which I was pleased about, as he destroys in multiplayer. The lootbox system does let it down though, which changes my view on the rating. But other than that; As there is no customisation, I'm not going to give it a high rating.

November 08, 2017, 05:57:56 AM
A lot of footage from the game is currently being released by the youtubers who took part in the EA event to play the full game.

A few of them include:
https://www.youtube.com/user/HelloGreedo/videos

HelloGreedo has released the most so far, but BattlefrontUpdates is currently releasing a way more interesting video:


Most of the footage that HelloGreedo shows, reveals to us a brand new look for phase 2 clone troopers on Kashyyk!
[spoiler]

So far, this footage shows great potential for the game. I am still hyped for it! Come faster November 14th!
#12

October 13, 2017, 07:34:22 AM
I remember playing on a specific map on SWBF 2004 ages ago back when the multiplayer servers were up, I was wondering if there is a mod that brought that map to the SWBFII?

SWBF2 Modding / Are Alpha testers of mods allowed to stream the alpha mod they have? Or not?

General / What do you think of Titanfall 2?

February 04, 2017, 11:33:06 AM
Whenever I try to play online on Gameranger servers, the servers say that my SWBF2 CD Key isn't valid. Even though I'm using the same SWBF2 that I used months ago, the one I purchased from Steam.
#18

Star Wars Battlefront: EA Reboots 1 and 2 / What are your hopes and dreams for SWBF2EA?


If this game actually happens, then we'll be seeing tons of Clone Wars content!

The art for the game looks epic!