Sorry that this is incredibly late, my account has been having issues posting/sending messages/etc.

I made this sky compilation kit to help people customize skies easier since that was something I really struggled with when I started modding.

I hope you can still find this useful!

As far as making a custom sky, you can edit a sky’s .tga file and create your own texture - just make sure the edges loop well or you’ll end up with a weird seam in your sky.
2

Welcome Center / Re: Bonjour there !

November 08, 2018, 07:36:11 PM
I haven't had time for any modding lately, but I'm still reading any and all 'unread posts since my last visit' almost daily. Hoping to get my modding machine back up and running soon!
4

3D-Modeling, Animation and Texturing / Re: Stepping through object

Units will 'sink' in the middle ring. The issue only occurs in this middle ring, the collision for the rest of the object is fine. I haven't defined a separate collision object inside the MSH in this instance (I had previously but I still encountered this issue) as the object isn't particularly high-poly.

Not sure if this is a conflict between the object collision and the terrain, or whether there's an issue with the collision generated by the object.

I'm curious if the grass is part of the terrain, or if it's part of the custom model? Do you always sink into it, or does it only happen when walking from the grass onto the ring? Can you jump and land on the surface correctly? (Can you only get 'into' the model from the side?)

If not, my initial thought is maybe the inner ring has some polys that have their normals flipped (the poly is facing downward)
I'd check that if you're not sure, and then one thing I've done with low-poly models is just duplicate the mesh and make the duplicate a collision.
5

Quote from: DarkHunter on October 28, 2018, 12:45:28 PM
but I replaced the tga archives where I realized  changes, and I put the original archives, so I dont know where is the problem when  I see white textures. Thanks man for your attention.

( how can I post some images about white textures for you to view the problem?)

I remember something too when editing tga files you have to make sure when you save you leave '... compression' unchecked. (If you're using GIMP)
Also I believe in the .msh file, if the texture is named incorrectly it could cause a problem?  I'd still say based on the original error message, the texture file in question 'hotx.tga' needs to be edited to be different dimensions - can't say what that will do to the object's texture mapping, but it should still be a power of 2.

If you head over to the Gallery https://www.swbfgamers.com/index.php?action=gallery and add a photo (it'll have to get approved, I believe), you can link the image you upload in a message using the code it gives you once it's on the site.
6

SWBF1 Modding / Re: Can Death Regions be animated to move in-game?

SWBF1 Modding / Re: Can Death Regions be animated to move in-game?

July 12, 2018, 09:10:47 AM
Interesting - now I'm also wondering about a base that moves around the map - maybe also on a train or something. perhaps creating a modified command post object with the regions tied to the animated building it's a part of.

SWBF1 Modding / Can Death Regions be animated to move in-game?

July 11, 2018, 06:49:09 PM
Hey all, I've been thinking about SWBF modding lately, and was wondering about if making a map with falling meteors or something - where if players got hit they would die.

That got me thinking about things like having an animated train moving around a map and you could walk on the tracks and stuff, but when the train came by if you got hit you would die.

I'm sure some kind of animated object with certain ODF properties could do the same task, but I'm curious if anyone has ever animated or tried to animate a region? (or an object created to act as a region perhaps)

July 11, 2018, 11:46:00 AM
I recently graduated college and am in a whirlwind of job-searching after having (half) moved as well and my modding desktop is currently across the U.S.

I was able to finish the castle's before/after destruction modeling and materialing before packing up, but I won't be able to continue working on it in earnest for at least several months - I might be able to work on some other models for the map - but i'm not sure if my laptop can handle 3ds Max.

But I am still planning on getting this map finished - i'm just in a crazy transitioning time at the moment
(i'll upload some model showcases semi-soon to show where i'm at.)


[EDIT]
Here's one of the reference images I have from the film of the Meson Martinet - one of the ship models I'm trying to create for the map.  Unfortunately, it's also the ONLY view of the ship in the whole film, or anywhere else on the internet for that matter - (there is a non-canon depiction of it in the Lego Star Wars Force Awakens game, but the ship could look cooler in my opinion) so there's a bit of creative license for the front half of the ship.  I haven't even been able to find any concept art anywhere either.

And here's the beginnings of the model I'm making for it (postponed due to not having my modding machine...):

I wasn't able to get any images of the finished castle exterior (non-destroyed and destroyed versions), but I'm pretty happy with how they turned out!

Sorry to anyone waiting for this map! I won't have access to anything for at least a few months..

Thanks for bearing with me though

this community's one of the best

January 08, 2018, 08:10:41 PM
If you're wanting the sun flare effect to change where it's coming from - that has to be done in your ModID.fx file I believe. I think the lighting directions should be alterable in the ModID.sky file though so I'm not sure what's would be going wrong there.

which values are you changing?

Here's a link (shameless plug because I think it's very useful and would help the community) to sky assets I compiled that might help figure things out - it's kind of a copy/paste / drag&drop method of changing skies / adding various objects/effects to the dome (death star, moons, planets, clouds, trees, mountains, etc.)

"Skies Made Easy": (and a tutorial on sky dome flyers)

Are you cleaning before munging?

I hope that's helpful? I'm not completely sure on changing shadow directions either and I'd have to test it out to see if it's something I just haven't run into needing to change yet.

I found a reference video made by ILM showcasing their model for Maz's Castle, and I've got the buildings set up correctly now.  Still no flags yet - but I've got a destroyed version of the castle just about completed! I haven't done UVW Mapping yet - so the textures are all just stand-ins and stuff. The next big part of getting the castle completed is figuring out how to create an animated death sequence where the tall tower gets destroyed like it does in the film - where the top comes off and destroy's Maz's statue.  I've also got a barebones interior working as well (with animated doors) with a spiral staircase going to the basement where Rey finds the lightsaber, and up to the roof. (The interior needs a lot of work still).

Anyways, here are a few images of the castle exterior before/after destruction (the different sections are destroyable one at a time, this is what it'll look like once all the buildings have been destroyed.) Currently the interior is still accessible after destruction - though I may change this. 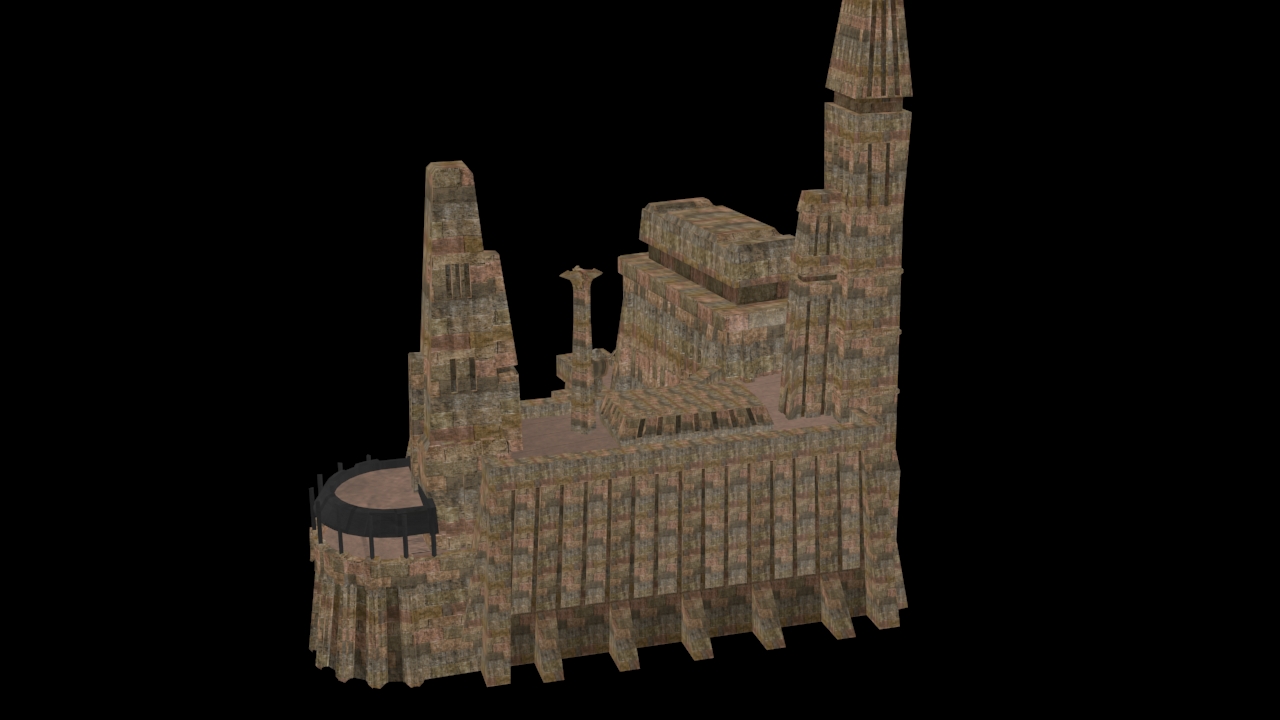 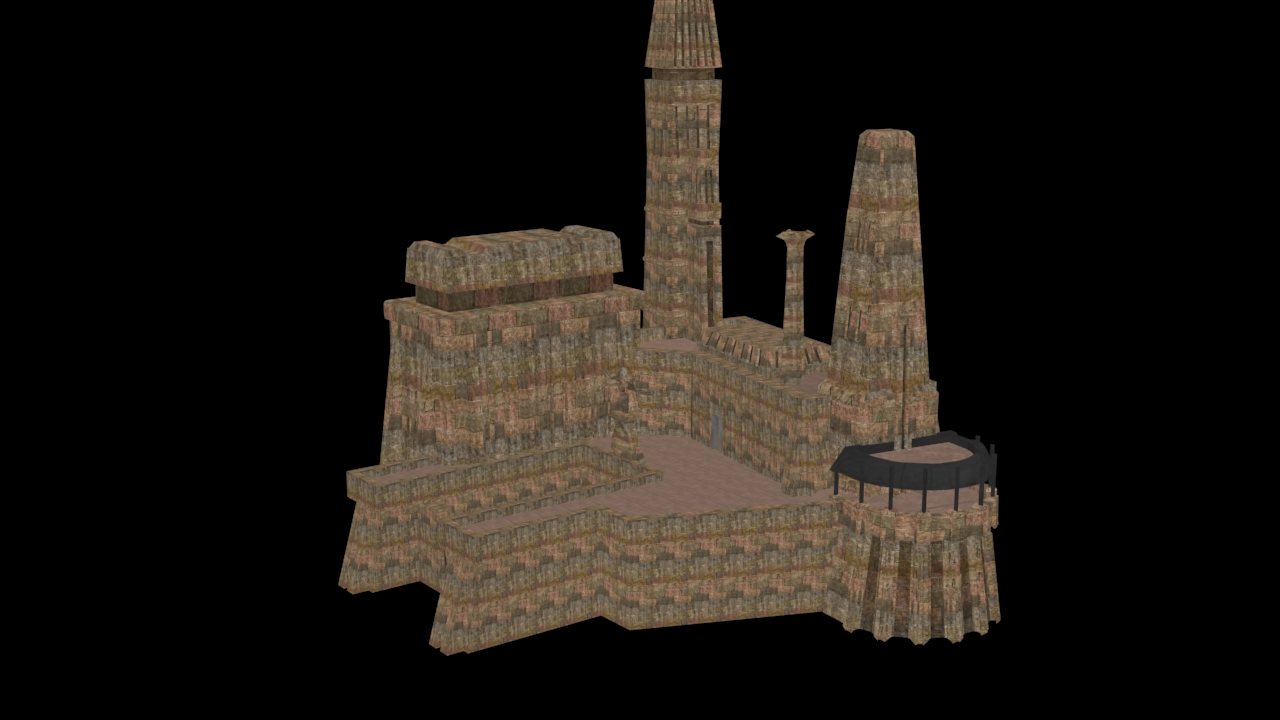 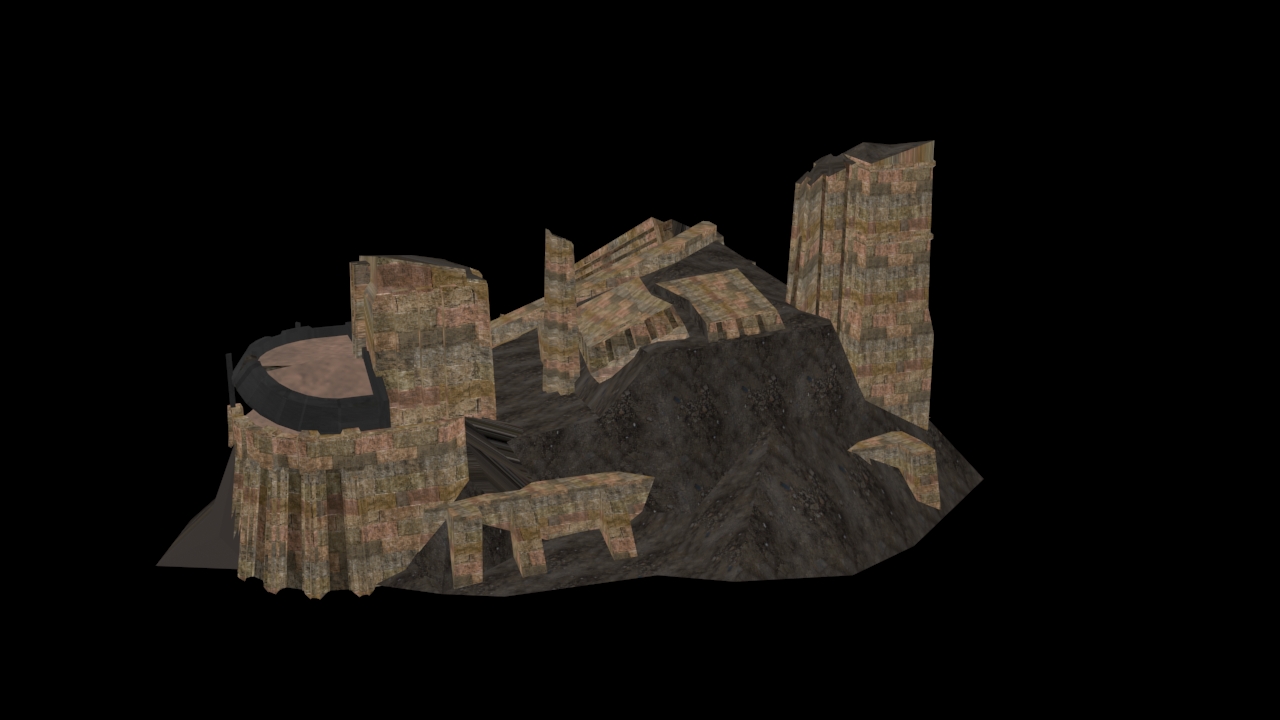 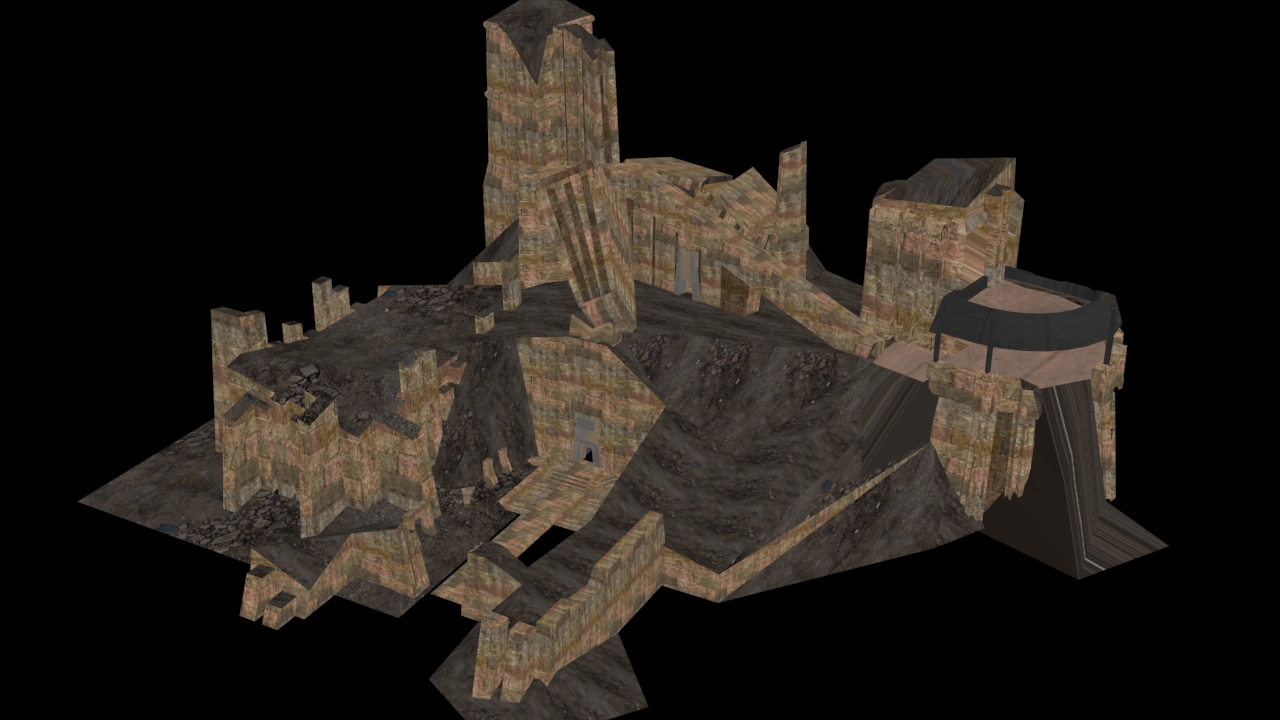 One of my hobby projects while I'm learning C# with WinForms is building a new BFBuilder-type tool for swbf1, but for some reason I'm having trouble getting the .wld files to load in zeroeditor. I'm not sure if the project will ever get finished but I'm hoping to make it more intuitive for new modders to get into making maps and stuff.  Like a point and click way to add various objects to your map and stuff, same with skies from the stock game. I may just scrap the map creation option and leave that to the current BFBuilder and just implement the rest of the functionality I'm hoping for.
15

October 16, 2017, 02:52:15 PM
I wasn't sure where to really put this post - but does anyone have any clue about whether or not the source for ZeroEdit has ever been/could ever be released? Or if anyone's tried building an alternative (from scratch perhaps)?

I know that the original game devs had a different (better) version of ZeroEdit.

The version that we have currently is riddled with bugs and has issues on a lot of systems...

Anyways, just a thought - it'd be great to have a more stable editor.