February 05, 2022, 01:01:19 PM
Hi, this is my most recent mod. I took the ideas behind the old 'Visually-Improved Sides Mod' and drove it into a sort of 'unofficial update' direction. So, with that, I've made some changes to balancing that can be found in the list below. This is not an 'overhaul' in the same manner as most of my older mods, because the idea was to keep to the stock sides setup as faithfully as possible while balancing things out a bit and tweaking a few things. I've also reworked things to make it more faithful to the source material.

Word of warning: this should be addon map compatible, with the exception of Jabba's Palace. I will be posting a separate update to Jabba's Palace to work with 1.4.

Republic:
-Replaced the models with more accurate models.
-Phase II clones added in for certain maps (Galactic Marines will appear on Rhen Var, and the Clone Sharpshooter will have a BARC Trooper skin on Kashyyyk and Yavin IV)
-Tweaked range of the Clone Pilot's ARC Caster - now, when an enemy is too far, AI will instead switch to the Blaster Pistol
-Added V-Wing for Bespin: Platforms (plays the same as the Jedi Starfighter)
-Changed visual effects for the Jedi Starfighter/V-Wing Proton Torpedoes
-Given more ammo per clip to the Gunship's rockets and changed the visual impact effect, also altered the explosion effect's damage to buildings.

NABOO: PLAINS
-Restored X-Wing/V-Wing to the map that was available in console versions

NABOO: THEED
-Fixed turret positions near the Palace CP
-Moved vehicle spawn near the Palace CP, now AI will no longer ignore it.
-Aesthetic changes to window textures
-Changes to the arch model and textures
-Palace has been replaced with an actual Palace model from Empire at War.
-[CAMPAIGN ONLY] Replaced the Naboo Guard models and textures with those made by Sereja.

YAVIN IV: TEMPLE
-Extended the top of the Temple building to be more accurate to the source material
-Added props to the interior of the Temple and a U-Wing parked outside

Other Games / Microsoft has bought Activision Blizzard King for $70 billion

January 18, 2022, 05:54:47 AM
Microsoft has just announced they have bought Activision Blizzard King. The deal for the beleaguered publisher/developers is reported to be about $70billion - almost ten times what Microsoft paid for Bethesda.

The sides are based primarily on those seen in the previous Bespin release, though they have been altered since. See below for more details.

Future Elite Squadron maps in SWBF1 will need this pack as a base. 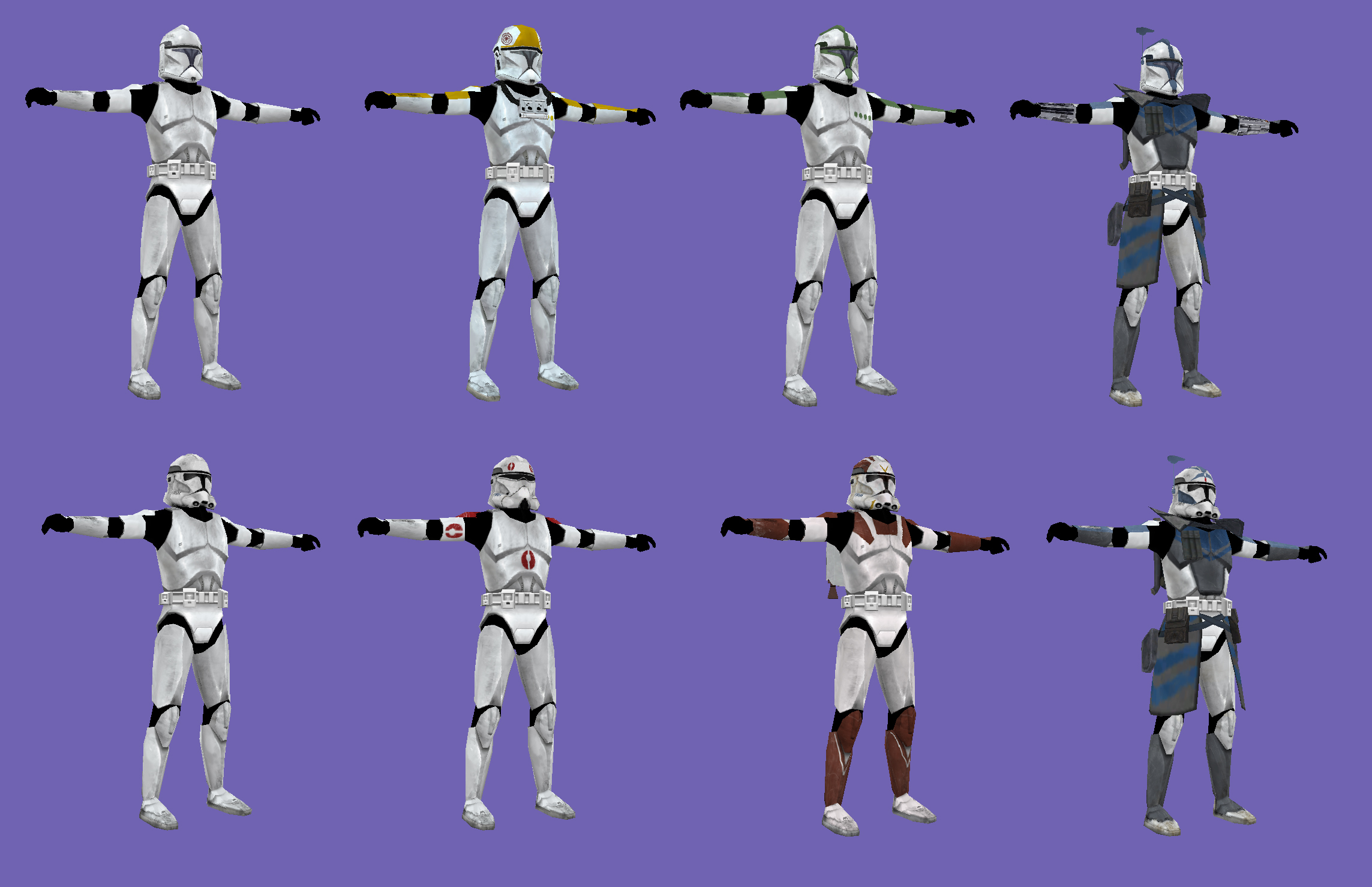 CREDITS
-Pandemic Studios for the mod tools and the base models.
-Sony Online Entertainment - Clone Wars Adventures ARC trooper models and textures
-ANDEWEGET for the ZETools.
#7

May 31, 2021, 11:09:38 AM
Since the last update, it seems that the old spoiler/hide functions are gone. This doesn't just go for new posts either: pre-update posts that used this feature are now 'broken'. This feature was quite useful if you were sharing large amounts of images.
#8


Lord_Bandu began this map a really long time ago. It would have used the same sides as his Jedi Temple Training Hall map, but he never got further than the hangar and the corridors in the video, and he no longer has that project. Alas, it seemed as if we'd never get a map like this - the SWBF2 interior is seriously lacking and not exactly the best thing to make a fully-fledged Invisible Hand map with.

Well, a while ago, I did Star Wars 2015Front II, a mod for Star Wars Battlefront II which was inspired by the 2015 game. I included Space: Mustafar's campaign in the mod, and as part of that, I redressed the hangar. I kind of wanted to give my own version of the map a try someday.

Today is that day. I have already begun working on it. At present, I'm about as far as Bandu was. Here's a couple of in-progress screens.

A couple of snapshots so far 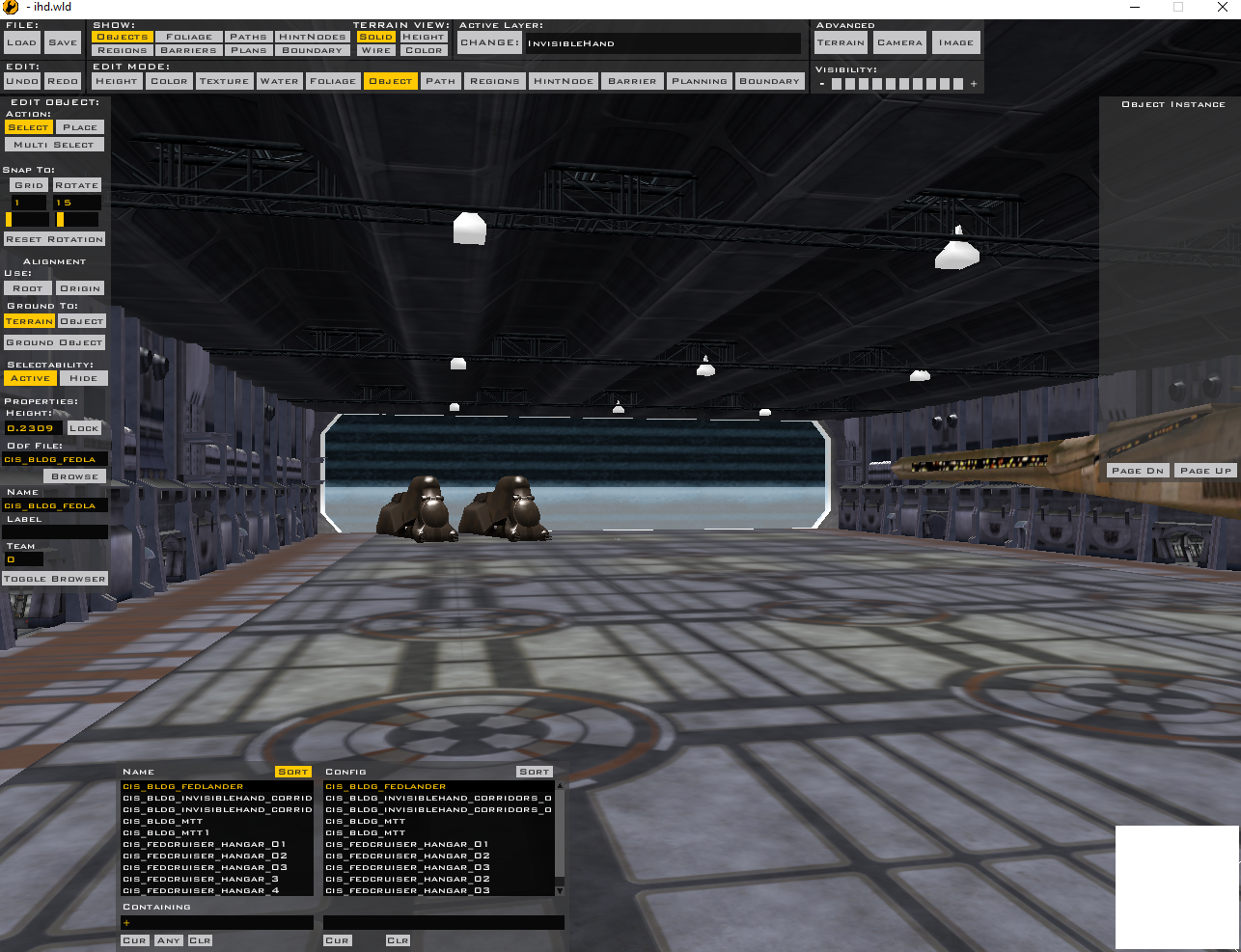 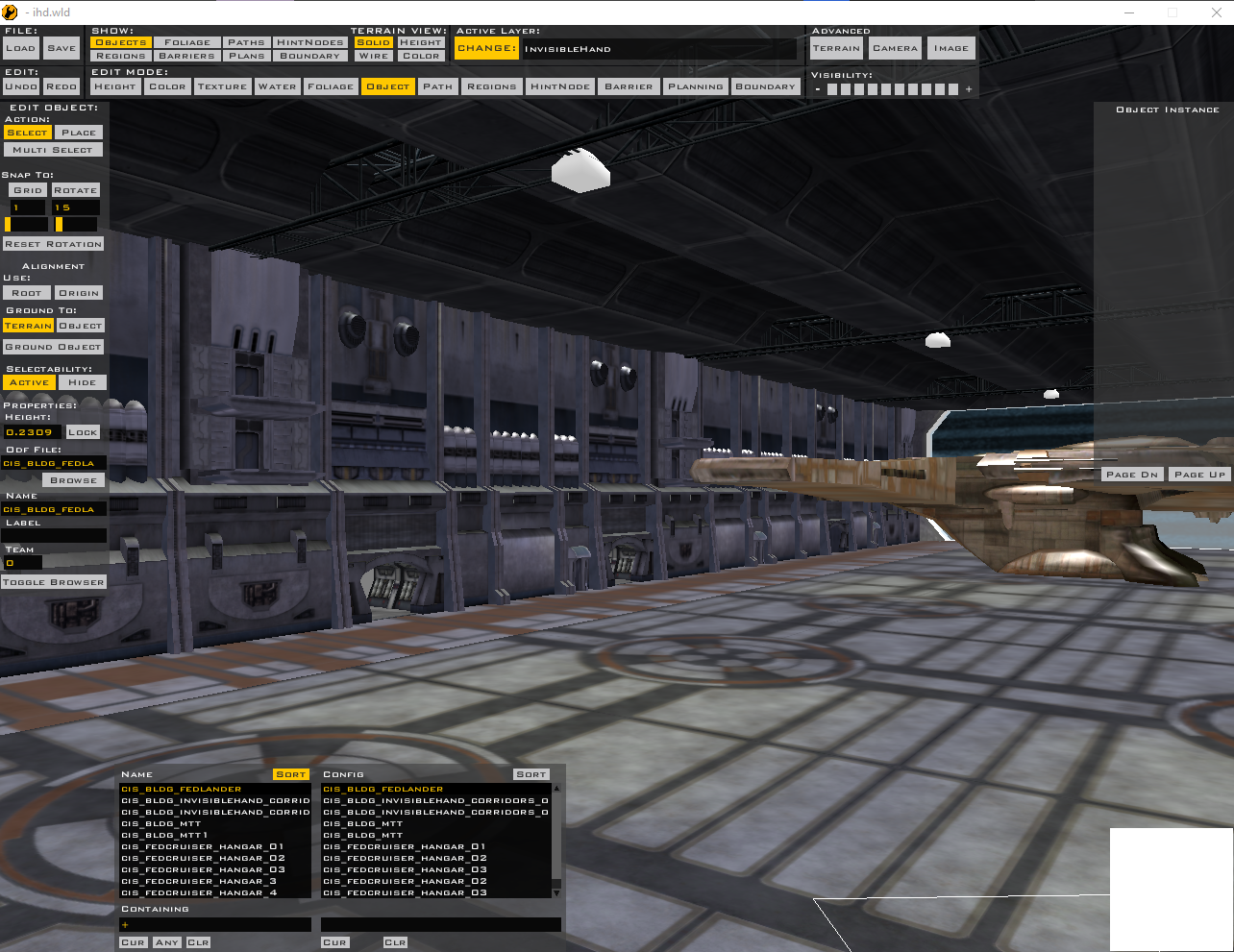 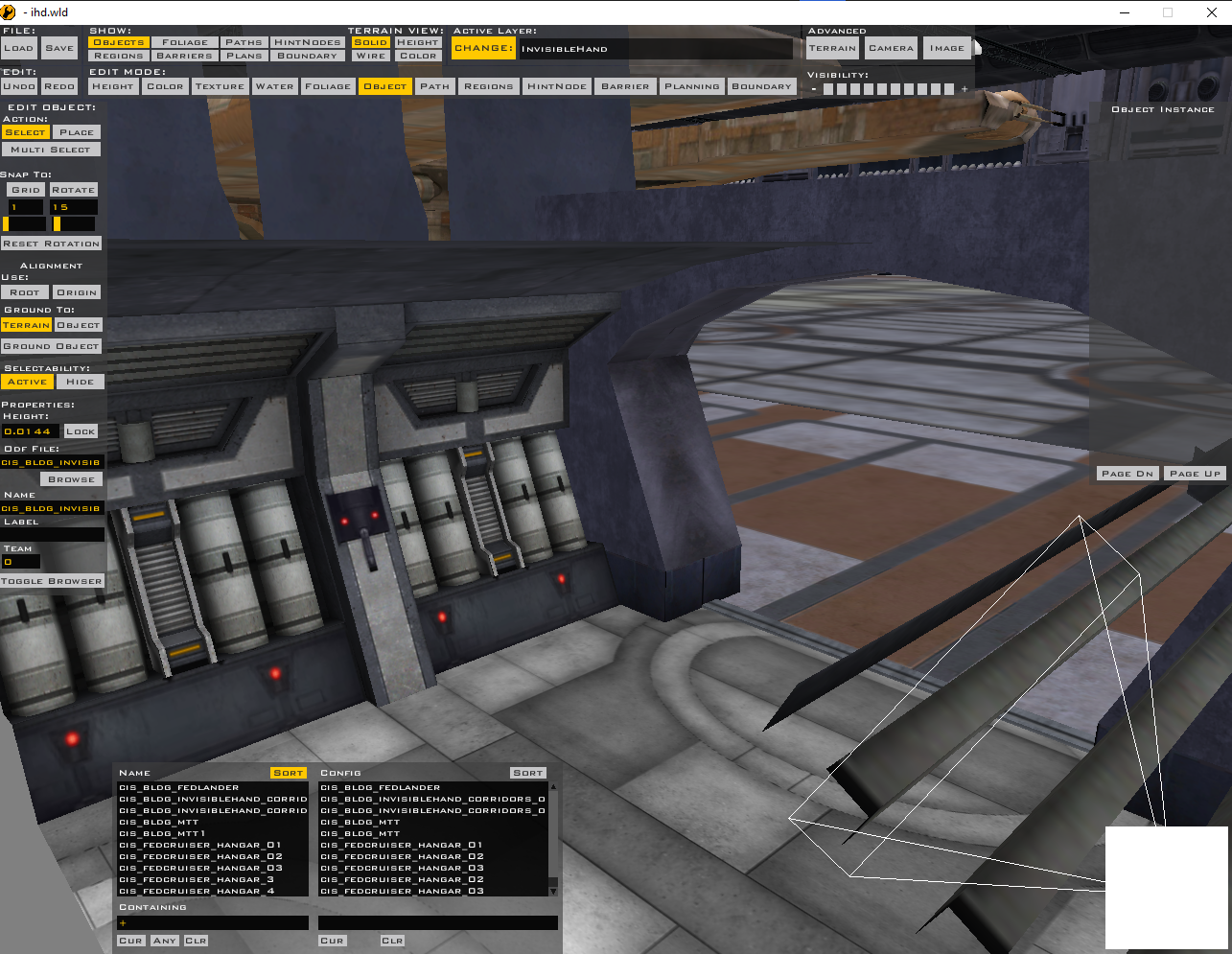 May 11, 2021, 07:44:13 AM
I'm trying to load additional layers for existing maps without having to directly munge entirely new LVL files. Specifically, I'm doing this to add in new vehicles. I did something like this for SW 2015Front II to add additional props to stock maps without having to rebuild them entirely, but the method I used there does not seem to work and I end up with an lvl file that is laughably 8 bytes in size.
#10

February 25, 2021, 09:04:14 AM
It's always nice to see modding going on in the community, but if you want to create some original stuff, you have a wealth of options - Unreal and Unity are two of the most well-known ones. But one that got brought to my attention lately (thanks to postings made by psych0fred on his SecretSociety board - check the Downloads/CORE folder) is the CORE Engine. It's built off Unreal 4, and it's also very much geared to quickly making good-looking, playable games. It uses LUA - the same type of scripting we use in SWBF modding.

Check it out here: https://www.coregames.com/create

Bear in mind it does have its limitations (primarily you can't use anything not created in the CORE editor), but it's a good place to start as far as making your own games goes. I'm going to be looking into making one of my first non-university games using CORE.
#11

February 12, 2021, 09:23:55 AM
One of Softimage's biggest drawbacks as far as its texture editing tools go is the inability to cut, sew and unfold UVs. It's something that's present both in Maya (which is extremely expensive) and Blender (which has not got full MSH export support right now).

Roadkill is an external app that deals with UV editing and includes these tools. This link also includes the xsiaddon plugin needed to get it working with your Softimage projects.

It works with Mod Tool and should also work with Softimage 2015.

January 04, 2021, 10:35:49 AM
Here's my conversion/update to te Elite Squadron Bespin map. I was supplied with the original map rip by Teancum, and I used that to make this map, making adjustments where I felt they were needed or where I thought the geometry could use a facelift.

Released Maps and Mods / Hoth: Battle Of Echo Base

December 01, 2020, 10:46:54 AM
I have begun work on a new map, this time a new Hoth map. The goal of this map is to create a new iteration of Hoth inspired by the official Blueprints book, with several of the key components that we all know from the movie (the Medical Centre, the Control Room etc) that are completely absent in the stock map.

There will be custom units, but much like Sereja, I will also give players the option to play with stock sides if they so wish.

I've just begun working on it, and have a new corridor system created just for this map. 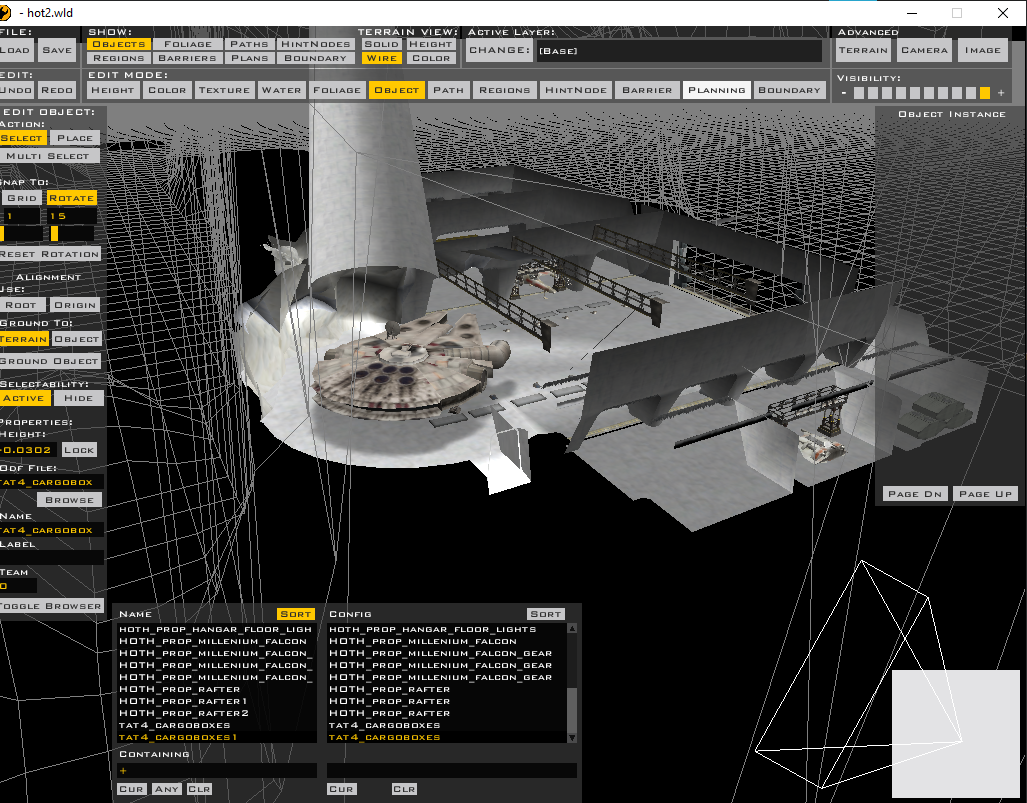 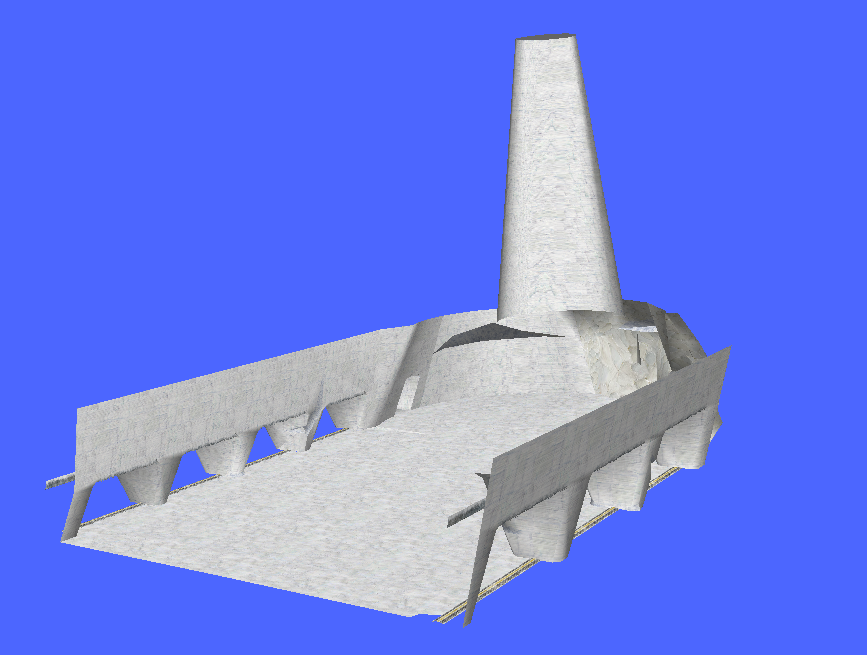 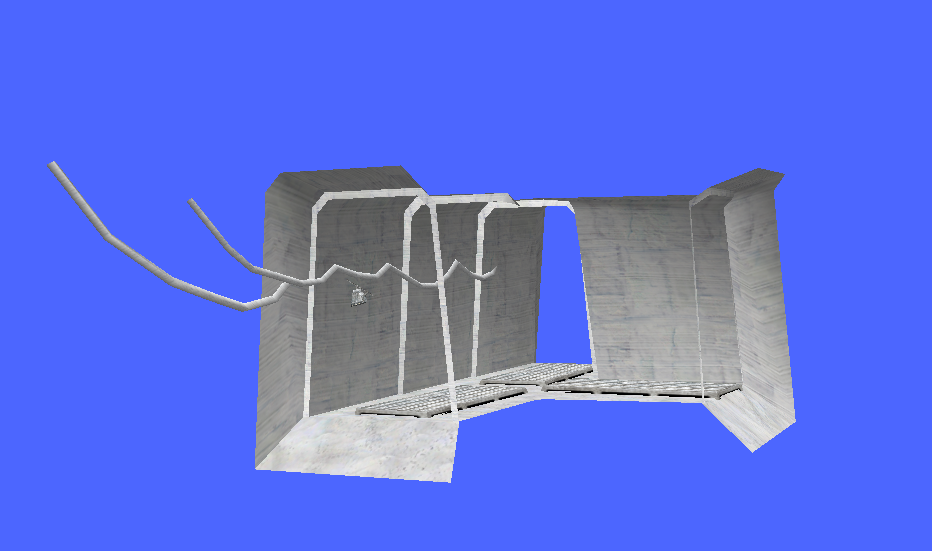 Credits:
-Pandemic Studios for the original models and textures 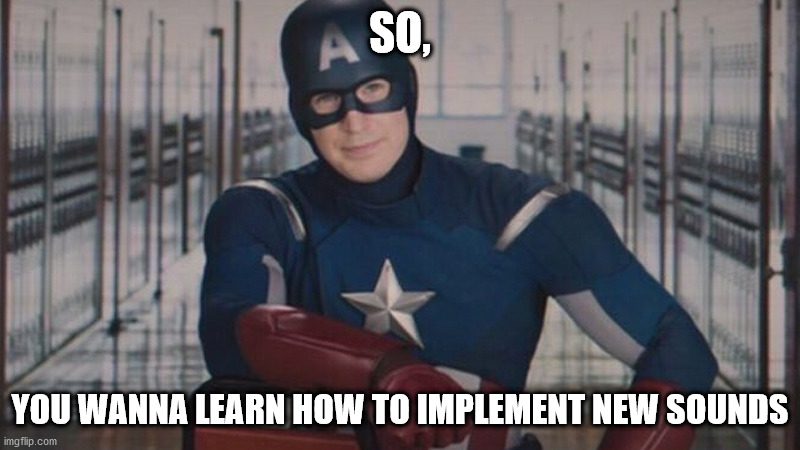 I'll be referring to the mod folder as MOD or DataMOD in this tutorial, but it'll be whatever you have named yours.

QuoteSND - this is the actual configuration file that stores what samples are called, pitch, volume, etc.
ASFX - this is where the samples called by the AU are stored.

Inside that, you'll also need two folders - effects, and samples.

Basically, this is what the folder will look like:


First, you'll need your sound effects placed into the effects folder. These sounds, ideally, should be saved as 22kHz mono wav files.

Next, you'll need to set up the REQ files. Open MOD.req. This is what needs to be inside:

Now open MODgcw.req. This is what needs to be inside that:


Same would go for MODcw.

The bnk section will look for ASFX and SFX files. However, SFX files are not useful in this instance since we're not making a new common.bnk, these sounds are to be munged and loaded directly from the sound.lvl

The next step is top open up the ASFX file in Notepad. It should be blank. All this will be is a list referring to the .wav files. All that needs to be is thus:

Now comes the 'fun' part - the AU files. Open shared.snd. Windows will try to open these in Windows Media Player, but they are, in fact, just text files, so you open these with Notepad also.

This is the 'fun' part because you have to figure out which settings are appropriate for the sound you want to implement.
In this instance I find it much easier to just find one of the stock AU files, open it, look for a sound that is similar to the one you're looking for. In this example we are going to implement a custom death sound SFX.

So find imp_unit.au in the sound/gcw folder Any of the sounds that inherit from "imp_inf_pain_vo" will be fine to copy into your au file.

Now, generally, the settings don't need to be messed with. You will need to change two things though:

-The 'name' of the sound
-The samples called in the list.

Name is easy. Just change it to whatever you want to. You can then paste that name into your ODF files' DeathSound line.

The sample list is a tad more complicated.
You have these values bracketed under it:

Sample is obvious as this refers to the file names as defined in the ASFX file. The number defines the 'weight' of the sound - basically, it randomizes the sound called. The number should always be 1 divided by the number of samples in the list, rounded to 2 decimal places.
Let's say this is what's in the ASFX file:


You'll want all of those to be called into the AU, and all equally 'weighted'.
So your sample list will end up looking like this:

That should conclude the setting up of the ASFX, SND and REQ files, but if you try to munge now, you'll get nothing. Unlike the SWBF1 mod tools, the SWBF2 Mod Tools aren't automatically set to allow for munging of custom sounds. So, there is a bit of tinkering left to do before you're ready.

Open up the soundmungedir.bat file
Find this line:

Paste this under that line:

Under that, pop this in:

Lastly, you'll need to edit an entry in soundmunge.bat inside your DataMOD folder. Find this line:

The last step is calling it in your LUA. Find this:

Then add this above

One other thing is that it seems the Sound folder won't copy over to the addon folder, at least not when I test munged, so you will have to do that manually.

Munge, test... and if your sounds work (there is a chance that a sound will not play if it's not in the correct format but usually the munger catches that), then that's it!

(NOTE: I am not able to test the munged sounds directly myself since I cannot get munged maps to even run in SWBF2 - however, the steps I have outlined produce a functioning sound file)

September 19, 2020, 12:04:00 PM
Here is the Shoretrooper I used in Scarif: Beach. Not much to say on this one, it's mainly based off icemember's though I did make a few choice adjustments to it. 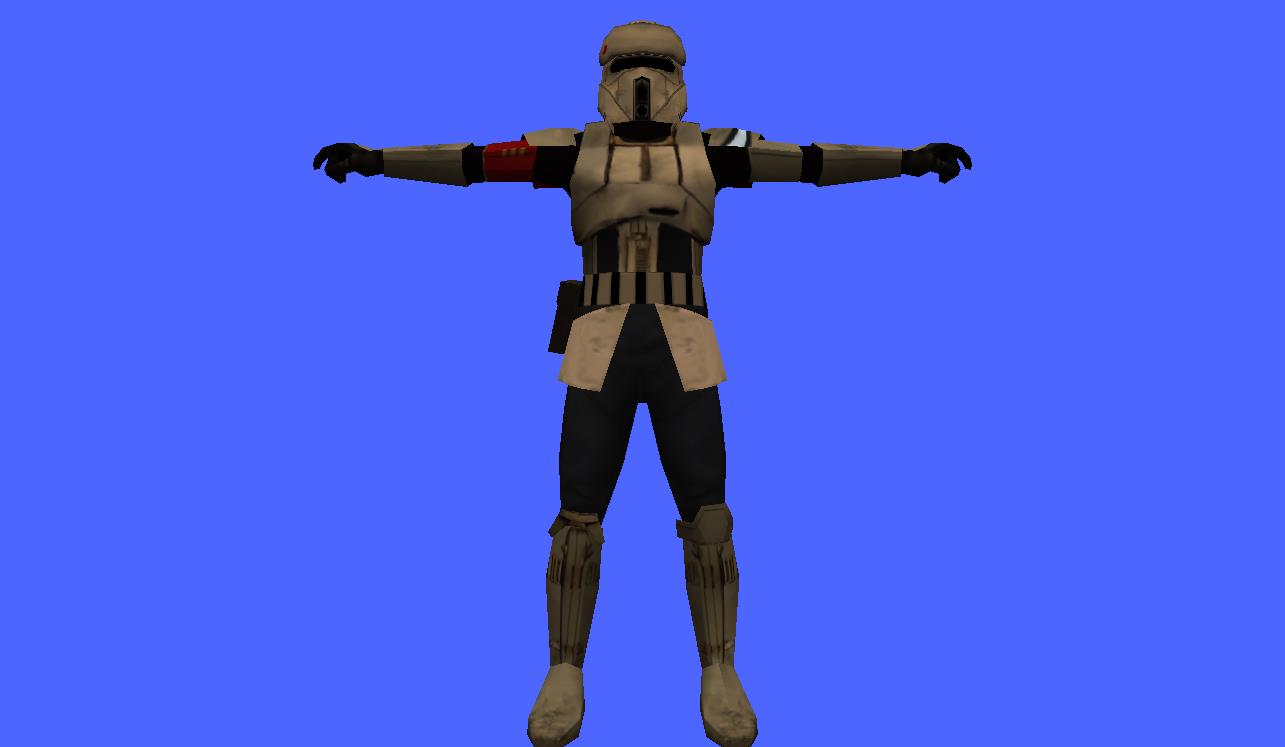